At the beginning of this year, I read a fascinating book about Silvia Tarniceriu called God Knows My Size. For school, I wrote a book report on it, and I thought I would share it with you.

Silvia Tarniceriu was born and raised in Iasi (pronounced Yahsh), Romania, and was the eighth child out of twelve children. Her father’s name was Pricop, and her mother’s name Elena. Because they were such a large family in communist Romania, it was hard for her parents to provide for them; therefore, many of her older siblings had to quit school and get jobs to help provide for the younger ones.

When Silvia was twelve years old, her tata (papa) took a trip and decided to take her with him. On the way,they stopped to see his sister, Estera, and while they were there, she and her husband convinced Tata to leave Silvia with them because they could better provide for her. She stayed with her aunt and uncle for one year and then went back home to Iasi.

One night when the Tarniceriu family was in church, the pastor said that God can do anything. This was very hard for thirteen-year-old Silvia to believe,and she decided to find out for herself if this was really true.That night when she was in bed, she asked God for a winter coat, a sweater, and a pair of shoes. (All three of them were basically impossible to purchase in such a large family at that time.) Then one day her family received a package in the mail that had all three items in it, and they each fit Silvia perfectly! From that time on, she never doubted God again and trusted him as her personal Lord and Savior!

When Silvia was older, she helped smuggle Bibles, but eventually was put in prison and persecuted for her faith. The only thing that kept her true to her Savior was the promise that “God knew her size” and that he could/would provide for her. After her release in 1983, she gave up her Romanian citizenship and moved to America. She was finally in a free country! There she got a job with “Christian Aid Ministries” which is a ministry for Christians in Romania. Silvia could help the Christians in her country at last! 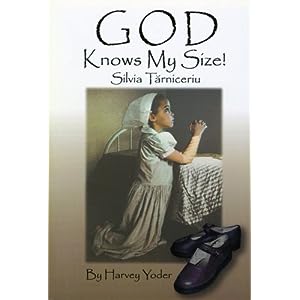 Silvia Tarniceriu is still living, and shares her testimony at various events across the United States.