This story begins weeks before when we heard an unusual and loud noise while driving back from Greenville in the “Big Van”… our beloved, white, fifteen-passenger “Grizzly.” A couple of weeks go by, and “the noise” comes and goes…

On Monday last week, Jessica and Victoria took the “Grizzly” to town to get the oil changed while they were running another errand. When they left home, the van was making “the noise” quite loudly, and so they called Patrick… they called him again as they continued to drive when they noticed that the battery light had come on.

He called them (third phone call) to check on them… and as they approached the intersection to turn into town, Jessica realized she had no brakes or steering! … But at least the noise was gone!

God turned the red light to a green arrow so Jessi was able to make the necessary right-hand turn into town (by “man-handling” the van). She then was able to get into the left turn lane, and because God cleared the traffic (again), she was able to once again man-handle the van into the NAPA parking lot and get it stopped. The NAPA store was the original destination!

Praise the Lord – for safety for the girls as they lost all brakes and steering! That the belt broke (yes, that was the problem!) at the very intersection where the auto shop was that was going to change the oil; that we didn’t lose the steering or brakes as we came over the mountains on our way back from Greenville… the place where the noise first happened. Praise the Lord it happened in our own town with “our mechanic” there to repair it!; and that it happened “at home,” not en route to Texas, the 1600+ mile trip we left for three days later. 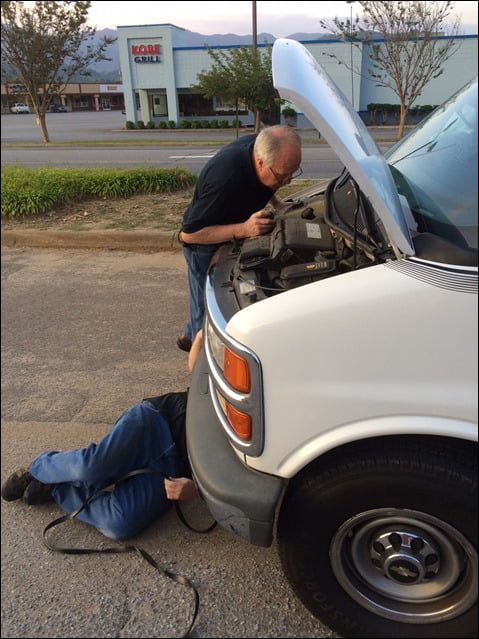 What an amazing evidence of God’s provision, protection, mercy, goodness, faithfulness, and grace.

How I praise Him.