Of Birds and Their Babies… Maybe

It’s still dark outside. The whole world is asleep, except for us, because we are getting ready to go to our first violin lesson with a new teacher, at a new time, and, of course, in a new place. Everything thing is still, there are a few sounds like the squirt of a not-so-new hairspray bottle, the whispering sound of a hairbrush through bed-head (or maybe you should multiply that times ten), the running of water as people attempt to get ready to go……then, it happened. The sound of two feet running up two flights of stairs, and one mouth screaming (it sounded like a dozen

on the nest!!!!!!” (That one person was Jessi. I think it scared her. 🙂 ) This one egg has multiplied itself by three in the past week, and it has been very interesting to see the parents interact with the shells that we’re not sure are fertile…

How It All Began

Just in case you didn’t know, last spring (2008), Amanda stole two baby mourning doves right out of their nest. Little did we know that this would lead 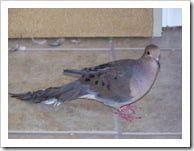 us to where we are now. After four additional birds and lots of fun and trauma, we were left with one lone mourning dove from the original pair (all the others died, including one of the original two), which was a plus for some and a minus for others. A friend, hearing of our “woe”, gave Amanda two ring-necked doves. We certainly were not expecting to become dove breeders, but it seems that that is what we have become (I think…).

Never tamper with the wild,

Or you may end up with a child.

But not a child that you’d expect,

And not a child from the elect.

But this one child comes from a shell,

Of which there’s no more need to tell…