Results of the Photo Caption Contest

The dining room was quiet. Used supper dishes were pushed to the center of the table, while eleven heads bent in concentration over the papers in front of them. An occasional giggle or comment broke the silence, but for the most part, all was still. Then, someone asked, “Do I have to pick just THREE? These are ALL so good!”

We were finally judging the captions for the photo caption contest of a few weeks ago! Each person was handed a piece of paper which had all the entries typed on it (without the names of the submitters), and we were to mark our three favorites. When we finally managed to narrow down the list to our top three (or four 🙂 ) favorites, we tallied the votes to find out which captions seemed to fit the picture the best. After seeing some very interesting results, we took the four finalists, and voted again. Then, when it was obvious which one had won the contest, there was a moment of breathless anticipation as we waited to hear who had submitted the winning caption! A drum-roll was called for, the winner was announced, and the room instantly burst into cheers! So, for those of you who submitted captions and are just dying to know who won :), here are the results. The winning caption was: 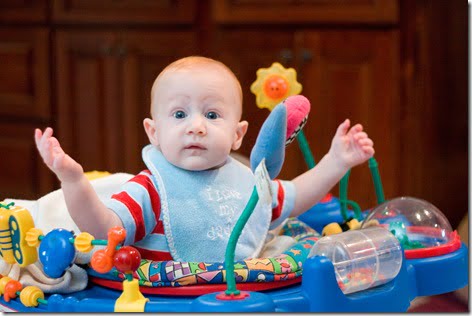 “What shall we say then? Shall we continue with baby toys?” , submitted by Michael S.

The other three finalists were:

“Where are all the boys???” by Uncle Jim

“Oh my! The Bb in measure seven was a bit sharp again – one more time girls…” by Joshua

“Did you see what I just did?? … Sometimes I even amaze myself!” by Aunt Lisa

One that we really liked when we had our personal family contest a few weeks ago was the one that Mom came up with: “Where’s my binki?” Another favorite was Dad’s “Why wouldn’t my sisters adore me??”

So a great big THANK YOU to all who participated!! We GREATLY enjoyed receiving and reviewing all the comments – please visit again soon!!!!! 🙂