While in Bainbridge for Thanksgiving, we decided to go to the annual “Swine Time” held in Climax, Georgia. This being my first Swine Time, I didn’t really know what to expect. This massive celebration of the pig included contests such as hog calling, chittlin’ eatin, a parade, and even a beauty pageant. (I wouldn’t want the dubious distinction of being “Miss Piggy.”) Really, it is just a gargantumous country festival and craft fair. Grandmama said that it was first started to bring the community together and to help raise money. Nowadays, about 35,000 flatlanders converge on a town of about 400 people for the annual event.

I suppose the whole thing began when our adventurous cousin, Taylor (age 15), told everyone that he wanted to enter the greased pig chase contest. I began to envision a big

any grass – just mud—where there would be a well greased, rather large oinker, running terrified from dozens- maybe hundreds- of kids that were chasing him. Then I thought about how much fun and excitement it would bring to chase the greased pig with Taylor. I don’t know what got into me that day, but the more I thought about it, the better the escapade sounded. I asked another cousin,

Austin (age 17), if he had been planning to do it. He hadn’t really been extremely attracted to it, but said that if I was going to do it, he had to do it. (Peer pressure.) All of a sudden, I realized what was rapidly happening. As soon as I said I wanted to do it, Neali (age 19) said she would do it if Austin and I did. (Peer pressure.) Then Kathryn joined, then Amanda, Victoria, and everybody else. Before I

could say “lickety-split,” all of us wanted to go to the pig pen. (Peer pressure.)

A few hours later we finally arrived at Swine Time. We soon learned that the contest was for kids ages 5-12. We older cousins not-so-graciously accepted the fact that we were too old. Well, I personally wasn’t that disappointed, and after watching all the little piglets in the trailer, I determined that I was glad that it wasn’t going to work out. All those stinky, grunting, noisy, smelly, dirty, snorting, squealing

pigs… it really would be very gross to try to catch one, especially a greasy one. A man told us that they grease the

pigs with hydraulic oil so that the pigs wouldn’t so feel bad about getting rubbed down with Uncle Porky’s lard. We got to watch them cover each pig in hydraulic

oil, and boy, did those pigs squeal!

We thoroughly enjoyed watching the younger kids chase the first little greasy animal. The poor thing was running frantically back and forth, squealing the whole time. It was hysterical! The kids were divided into groups of 10 kids, according to age, and each division was assigned an even larger pig. When they would catch it, sometimes you could see it panting, while it was squealing. (By the way, I had never heard a pig squeal in real life… it is quite a horrendous noise! It puts a whole new meaning to the term “squealing like a stuck pig!”)

Well, it was over, and the large crowd encircling the pen quickly diminished. Aunt Miriam wasn’t going to give up yet, though. Taylor still wanted to have a chance at catching the squirmy little pig. Aunt Miriam asked one o

f the men that was helping if we could have an unofficial contest. At first, I think he said no, but she persisted. He was quite friendly, and she told him that we had about thirteen cousins who wanted to chase the little oinker. He agreed, and we happily entered the pig pen and

waited while they re-greased the pig.

The incredible moment had arrived. We had looked forward to it, but thought that it wasn’t going to work out. Before we knew it, there we were, standing in the pig pen, and by the way, it wasn’t all mud. Actually, it was mostly grass, thankfully. I heard several people say in amazement, “They’re all cousins?!” Finally, someone said, “On your mark, get set…” and everyone was off. The pig started running and squealing. I personally didn’t want to touch it, so I just chased it to keep it moving. Picture it and get

your imagination going. There are thirteen different sized people, ranging in age from five to nineteen and in height from 3’6” to about 6’ 1”, chasing a pig in a circular pen that is probably about fifty feet in diameter. Several people slipped and landed on their face on the ground. Others only landed on their knees, some fell on their backs, but it was a lot of fun, and the intense action continued. Arms and legs were flying every direction. Everyone was racing to try to catch the little ham. Kathryn was one of the  ones who landed on their face, and when she landed, she lunged for the pig, grabbed it, and was able to slow it down, despite a minor injury that occurred in the process. Austin came to her rescue and grabbed the legs of the pig, and everyone cheered! It was lots of fun, and the memories that were made are irreplaceable. Some of the parents are scheming about next time we get together. It has been mentioned that it would be fun to get our own pig and chase it around Grandmama’s house… we’ll see about that. (And to think that it all began with a small amount of peer pressure.) 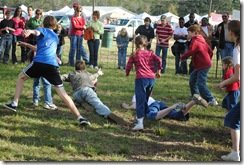 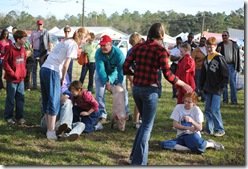