Are You Ready for a Trip to the Galapagos Islands?? 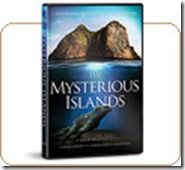 A few weeks ago, we received a package enclosing a new DVD released from Vision Forum, called “The Mysterious Islands.” The film centers on the present-day war between Darwinism and the biblical Creation account. To do this, it takes you on a journey to the Galapagos Islands, where Charles Darwin first did his research that later resulted in his book, The Origin of the Species. As we got it right before leaving for our trip to GA for Thanksgiving, we took it with us and decided to watch it with our cousins. We did and it was a refreshing look at how good God is and filled us again with awe for His intense creativity!

One thing the video covered that particularly stood out to me was a story they told about Darwin’s trip. He was taken by ship, and during the course of the five-year voyage, became close friends with the captain. They were both seeking answers, but though they studied the same things, they arrived at vastly different conclusions. Darwin, because he had already determined in his heart that the Bible was only good for moral issues, not science, became convinced that the world and all therein was a result of random chance, mutations, natural selection, etc. The captain, on the other hand, found striking evidence for the Creator and later became a strong Christian. This reminded me of the importance that we interpret everything through the truth of Scripture, God’s infallible Word, and that our hearts must be tender toward that truth. These two men witnessed the same sights, walked the same shores, and studied the same creatures and processes, but because one carried with him that baggage of worldly philosophies, he was blinded and led to draw up some of the most ridiculous theories imaginable. The other found God’s Light, grace, and Almighty hand to guide and direct his life and help him see his true origin and the reason for his existence.

Because of this fierce battle between these two vastly different worldviews, I was also reminded that we, as Christians, must be seeking God and studying His creation so that we may be equipped to pass on the truth to the coming generations. The Lord used this film to renew my excitement in these things and my awe for Him and His matchless ways! He truly is amazing!! If you have not seen this, we highly encourage you get it. You will be inspired! Our whole family is now ready for a trip to the Galapagos!

“O Lord, how manifold are thy works! in wisdom hast thou made them all: the earth is full of thy riches. So is this great and wide sea, wherein are things creeping innumerable, both small and great beasts. There go the ships: there is that leviathan, whom thou hast made to play therein. These wait all upon thee; that thou mayest give them their meat in due season. That thou givest them they gather: thou openest thine hand, they are filled with good… The glory of the Lord shall endure for ever: the Lord shall rejoice in his works… I will sing unto the Lord as long as I live: I will sing praise to my God while I have my being.” (Psalm 104)

“O Lord our Lord, how excellent is thy name in all the earth! who hast set thy glory above the heavens… When I consider thy heavens, the work of thy fingers, the moon and the stars, which thou hast ordained; What is man, that thou art mindful of him? and the son of man, that thou visitest him? (Psalm 8)