The biggest event of our week so far has been an addition to the family. Or, perhaps I should say 60,000+ additions to the family! For a long time we have been interested in bee keeping, and because of the generosity of Mr. Brandon, our front yard and the surrounding area is now the home to five hives swarming with honey bees. We are just “housing” them for him, but this has been unbee-lievably educational and we may just have to get some of our own in the future!

For all of our bee-keeping friends, none of this may surprise you, but for people like us, you might find this fascinating! Did you know:

– that male bees (drones) can’t sting? And that they are stung to death by the females after mating season? (Sounds feministic, if you ask me!!

– that the worker bees control the hive population by only giving the queen enough food to lay the number of eggs they want?

– that the workers select the largest larva, build a bigger cell around it, and feed it extra to make it a queen?

– that the new queen makes a special buzz before leaving her cell, announcing her arrival to the other queen and telling her to prepare for battle?

– that the “scout bees” use special body motion to tell the hive of the location and distance of food? (the angle of their movement implies direction; the duration of the motion communicates distance)

– that when the bees leave the hive, they either fly straight out, or they do an upward spiral and then fly straight?

– that a queen bee can live between 3 and 5 years?

– that the eggs hatch into larvae after three days, and the larvae turn into bees after an additional 6-8 days?

– that if you face the entrance to the hive toward the sun, the bees will leave the hive earlier in the morning?

– that if you have an excessively aggressive hive, you just replace the queen, and in a few weeks, the hive genetics will have changed? (Occasionally this doesn’t work though. Mr. Brandon once had to replace the queen 3 times and finally had to burn the hive! But that was only with REALLY mean bees…

– that honey bees have the ability to live for 2-3 years, but they work themselves to death in a few weeks?

– that the hive temperature has to be kept between 90 and 97 degrees F. or the larvae will die?

– that by flapping their wings, the bees have their own air conditioning system? And that by standing in certain positions, they circulate the air in one side of the hive, and out the other?

Thanks to Mr. Brandon, and City of the Bees – a  Moody Science film we found fascinating – for all of this information! 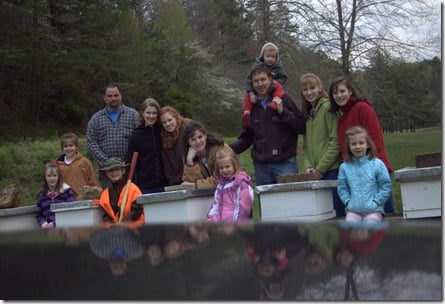 “O LORD, how manifold are thy works! in wisdom hast thou made them all: the earth is full of thy riches.”  Psalm 104:24